This October I am planning to focus a little more on creative writing than I have on here in the past. I plan to publish one creative writing piece a week using snapshots from my iPhone 5s as my “prompt”. All of my stories will be approximately 1000 characters or less as I know some of my longer fiction pieces have gone unread simply because of their length. My goal is to become bolder in sharing some of my fictional work while also continuing to hone my skills. Feel free to leave me comments and ideas for future creative pieces! 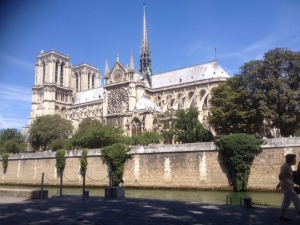 “Good day, Madam Tabby.” Philip, the castle guard nodded as he opened the door for one of Queen Elizabeth’s attendants.

Tabby lifted her beige dress from the ground and curtsied politely upon entering the palace where she spent her entire life. The sun had just begun to peek over the horizon and it was time for the Queen to be awakened. Tabby headed for the steep stairwell lit completely by wall-torches. She ducked her head as she wound up the staircase for exactly seventy-eight steps. Tabby had performed this morning ritual since the age of eleven and she had begun to rely on her routine as much as Her Majesty.

Outside the Queen’s quarters sat a buffet table on which sat her water pitcher for the evening. Tabby retrieved a glass from the table and proceeded to pour from the pitcher. Queen Elizabeth requested a half glass of lukewarm water promptly upon awaking every morning.

Armed with a glass of water Tabby pushed open the door to the Queen’s bedchamber. Most days Tabby entered to find the Queen fast asleep. This provided ample time for her to empty the bedpans and prepare the attire for the Queen for the day. However, on this particular morning she found the red-haired heiress sitting up in her bed and staring off in the distance out her bedroom window.

“Good morning, Your Majesty.” Tabby bowed in the Queen’s presence while balancing the glass of water.

“Is there something troubling Her Majesty?” Tabby inquired as she handed the queen her glass.

The queen twirled her graying orange locks around her pale, thin finger. “I’m just at odds this morning.” Her eyes drifted from the window to her dear companion.

Tabby had been in service to the Queen since her coronation. Nearly thirty years had passed since Tabby had become a member of the royal residence and devoted her entire life to the happiness and service of her beloved Queen. During her reign Elizabeth had scarcely trusted others. She had learned through her childhood of the abuses that others were capable of. These experiences had led Elizabeth to be a bit of a loner. She would not be taken advantage of. The one person she chose to confide in was the ever-faithful Tabby.

As Tabby began to sort through the magnificent wardrobe of the bedazzled queen, Elizabeth began to speak her mind. Thoughts began to form in such a way that she would only feel comfortable speaking to her friend.

“The counsel has advised me to order the execution of my cousin, Mary.” Queen Elizabeth was referencing her cousin Mary Queen of Scots.

“And why might that be advised?” Tabby inquired of the queen.

“The Catholics of the country are beginning to murmur of her right to the throne over myself.” Elizabeth began to explain. “The political matters of this country put me at odds with my conscience. I love Mary dearly, however, I’m advised that if I am to keep England unified that the execution orders must be carried out. And the preservation of the crown is my first priority.” Elizabeth began to look downtrodden.

“Do you fear that she may accept the charge of the Catholics?” Tabby asked. She had begun to help Queen Elizabeth from her sleeping gown in order to dress her for the day.

“I’m unsure of her position. The last time I spoke with Mary we were still so young. I’ve received letters, but none where anything relating to the throne was discussed. We’ve been only pen pals most of our lives. I had found a friend in her as a young child, but times have changed. Life has become less about innocence and more about the Crown Jewels” Elizabeth slipped into her corset.

“Do you remember what it was like when your older sister locked you in the tower because of the threat you posed to her reign?” Tabby redirected the conversation to a previous experience of Elizabeth’s young adulthood.

“How could I forget such terrible days? Locked in the Tower of London…” Elizabeth blinked back memories of abuse from her tormented sister, Mary I.

“And where is Mary Queen of Scots today?” Tabby asked of the whereabouts of the woman in question.

“Currently, locked in the same dungeon. Awaiting my decision.” Elizabeth was now seated on a pouffe where Tabby brushed her course, tousled hair.

“If I may say so I would caution you that you may want to think back to that experience and judge your decisions based on what befell you there.”

“So much wisdom from a lofty servant, Tabatha.” Elizabeth spoke kindly to her friend.

Tabby moved from taming the wild locks of the queen to perfecting her pale complexion with the use of a chalky substance.

Elizabeth spoke kindly to Tabby for a few more moments. They discussed the Queen’s plans for the day and the upcoming appointments that she was anticipating. The two women shared in a warm pot of tea delivered by one of the cooks from the kitchen. After much conversation and gossip Elizabeth returned to the idea that had begun their interaction that day.

“Thank you, Tabatha. You have done a great deal today for me and the kingdom. I’ve come to realize that it would be necessary to hold my cousin until my death to protect my claim to the throne. That is why she is presently being held in the tower. My duty is to protect my Protestant nation after my death. I know that Mary shall not be the heir after my passing. I would not dream of her inheriting your friendship should a plot be drawn to bring my demise. Please summon the Advisers. It is time that I sign those execution orders.”

**This historical fiction piece is only very loosely based on true events. Dialogue, characters, and situations have been fabricated in the creation of this HISTORICAL FICTION piece.