The following is an article that I wrote for the Covenant Life Magazine May 2016 issue. This is a publication put out by Covenant Church quarterly. Some of you have been asking to see the article so here it is: 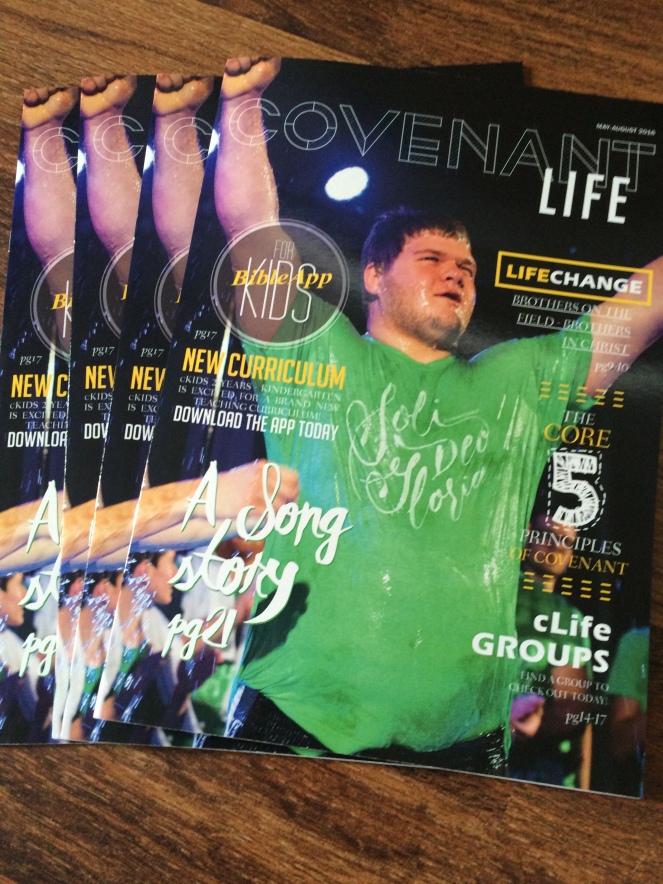 Fifteen minutes south of Grove City in the small town of Ashville, God is moving in big ways through athletes at Teays Valley High School. Neal Davis, a senior captain of the football team and member of Covenant Church, has made a big impact on the life change taking place on that campus. Neal began to cultivate a relationship with Christ his freshman year of high school and soon became a leader in his school’s Fellowship of Christian Athletes. Neal used that platform along with his enthusiasm to spread God’s Word in order to reach his team.

“I was invited by my FCA Advisors and David to attend Covenant and I was looking for an uptempo and more modern church. Everyone shared my excitement for God and I felt like I belonged.” Neal recounted about his initial experiences at the church.

As a leader for FCA, Neal was in a position to impact others and lead them to Christ. Through his involvement in teams and FCA he met Walker Moore. Walker, a younger football player, looked up to Neal as a team captain. Before long Walker began to notice that there was something different about Neal. He wasn’t like many of the other athletes. Although passionate about his sport, Neal still displayed his faith on the football field. He was encouraging and applied the principles of his faith to playing the game.

Walker began to spend more time with Neal and soon came to faith as well. Shortly after Walker accepted Christ, Neal invited Walker to Covenant Church. Through their friendship they have been able to reach and impact other members of their team as well. Both Neal and Walker have felt called to roles of leadership amongst their peers and are known for their character throughout the high school. They both have a large influence and credit God for their successes in academics, sports, and beyond.

However, it wasn’t always that easy to bring his friends to church. Over the next two years Neal continually invited other members of his team to attend church with him often without success. But one week after many attempts he was able to convince the team co-captain and quarterback, Drew Pennington, to join him on a Sunday morning.

“Neal asked me to go with him several times, eventually I decided to check out the church and I loved it. Now I attend Covenant nearly every Sunday.” Pennington recounted about his decision to call Covenant Church his home. Prior to attending the church Pennington had not accepted Christ. He had always known that God was making a big impact in the lives of his friends and he soon would experience those changes himself once he accepted the invitation.

It is through the prayer and persistence of one high school student that God brought several members of a team to know him. Neal’s journey of faith and his courage to reach out to others around him started a chain reaction on his team.

“Faith, Family, Football…” Neal’s mantra is a perfect example of how God has shaken up the lives and priorities of these three high school athletes. In a day and age where kids and families can be so centered on what they do these boys are choosing to place their focus on who they are in Christ. They are all three extremely talented athletes and two of them will be competing beyond the high school platform, but they have learned that if God isn’t first then everything else is worthless.

This January, all three of these students decided to make an outward expression of their decisions to follow Christ and were baptized. God has started a chain reaction with this high school football team, but this story isn’t finished yet. One of the Core Five values of Covenant is that We Bring Our Friends. Their story serves as a lesson to everyone that the more we step out and invite others to church the higher the possibility that those people will accept that invitation. This is a reminder that it just takes prayer and persistence to set off a chain reaction in your sphere of influence. If you don’t give up even when a friend, family member, or co-worker says “no” God may still be using you to work on their heart.

“I have been growing in my relationship with Christ and I felt that being baptized was that next step to growing closer to Christ.” Walker Moore

“I had always wanted to [be baptized] and I knew if I did in January my friends may be more comfortable doing so too.” Neal Davis

“I decided to put all of my faith and trust in God and to follow the path he has for me.” Drew Pennington