Will’s brother, Shawn, is dead. The rules of his neighborhood say he must avenge his brother. He grabs a gun and enters the elevator with a plan to murder Shawn’s killer.

The sixty seconds that Will rides the elevator help him to see that revenge isn’t his only option. In that time Will is confronted by other victims of gun violence and they help him to see clearly and distract him from his anger.

This book is written in verse and is a quick read. My husband and I took turns reading aloud from this book and finished it in about two hours. Although the story is short it makes lasting impressions on its reader. It is clear to see why this book landed on the honor list for the Coretta Scott King award. I really love Jason Reynolds and the way his works are challenging gang culture and violence in the United States.

Last year year I read All American Boys which he co-authored with Brendan Kiely. That novel took the perspective of two boys who witnessed an act of police brutality. Kiely authored a white boy’s voice as a witness to the crime while Reynolds penned the voice of the African American boy victimized by an officer. I’ve book-talked All American Boys and several students have read it this year. It’s a classroom favorite amongst my ninth graders. 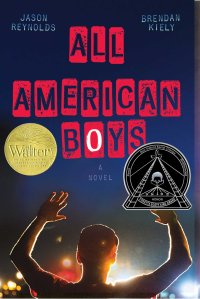 I highly recommend both books.