Welcome to my very own Creative Writing Month where each day of the month I am focusing on a topic and spending fifteen minutes reflecting and writing as inspired by the topic. For more information about why and how check out my post, Writing Down the Bones.

Today’s topic: Write about the most terrified you have ever been in your life. 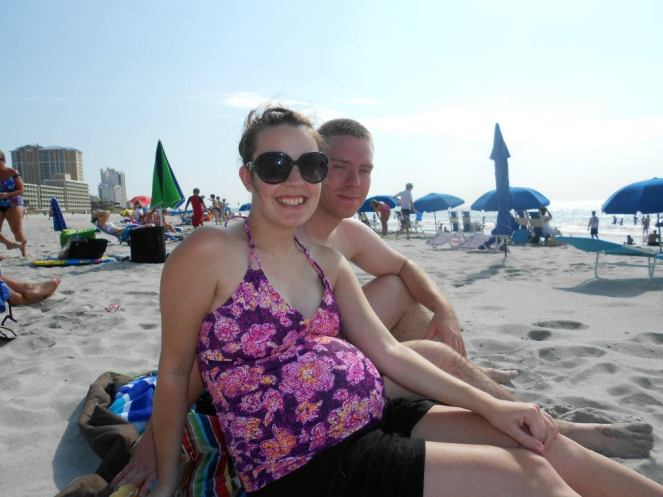 It was an early August afternoon. The sun’s rays were bright and growing brighter as we made our ascent to the top of a Virginian mountain peak on part of the Virginia Turnpike. The thermostat in the car stated the fact that the temperature outside our air conditioned vehicle was 97 degrees Fahrenheit. Sam and I were carelessly singing along to some Top 40 radio station in the middle vehicle of the family caravan home from our vacation. The trip had been our final excursion before the arrival of our beautiful baby girl. I was eight months pregnant and already experiencing Braxton-Hicks. Even our doctor had recommended that we didn’t take this final vacation due to some of the signs of preterm-labor I had shown the day before our departure. However, I was stubborn and wanted this last trip for myself. Who knows when I might get another opportunity to get away like this with my husband? I thought to myself.

We had been on the road for about four hours. We were behind schedule due to my frequent bathroom breaks. And we killed time between my timed Braxton-Hicks contractions by singing and talking about how our life was about to change in the next few weeks.

As we made our way up the middle of an extremely steep mountain an oily liquid sprayed the windshield of our Ford Focus. At first we were unsure about where the liquid had come from, but then the engine began to smoke and it was clear that our vehicle was malfunctioning. (Just to add salt to the wound this was the moment that would cause Sam and I to have to replace our engine of 12,000 miles with a used engine of 90,000 and would set into motion another terrible event a year and a half later…but that’s a story for a different day.)

In a moment of panic Sam pulled off to the minimal road shoulder. The car was smoking so we both had to make our way out of the vehicle quickly. We found ourselves in the overgrown grass on the side of a mountain. Not sure if the car was going to catch on fire Sam helped me over the guard rail so we could get a safe distance away from the car. On one side of us sat our overheated car on the other side a cliff off the side of the mountain. It was hard enough to balance myself with all the added baby weight let alone at the steep incline of the mountain. Fear overcame me and I realized the reality of the situation. At this point we had lost vision of the rest of our caravan and it was just Sam, a smoking car, and me in the 97 degree heat stranded on the top of a mountain.

Sam cleared a place for me to sit in the grass while he called for a tow. I tried every method of calming myself that I could think of, but my contractions were picking up and gaining momentum. Each set of contractions made me panic more as I was spiraling into active labor. Sam was a few feet away unable to move because he had finally tapped into cell service. We quickly discovered that we were about fifteen minutes away from any other town and the tow truck wouldn’t be there for about an hour. The best they could do was send a service vehicle to alert traffic that we had broken down so that oncoming traffic would move over to the left lane. That was more for their safety than ours as our car was still smoking.

After he got off of the phone with the towing company Sam called the rest of the family who had gone on ahead of us. They reasoned that there wasn’t much they could do and stopping on the side of a mountain would put the rest of the family in danger so they decided to pull off in the next town and wait for us to get there. (We purposely didn’t mention the contractions in an attempt to keep them calm.)

About fifteen minutes later a vehicle from the local Department of Transportation pulled off to the side of the road with all the blinking lights and alarms they could use to alert the rest of the drivers on the turnpike of our dangerous vehicle and location. It was nice that the cars were no longer in the lane ten feet from me going eighty-five miles per hour. I was as far away from the road as I could be without toppling down the cliff and I could still feel the excessive wind from each passing car. Eventually the man emerged from his alerting vehicle and took one look at me and panicked.

“Um, Sir?” The man spoke to my husband who was once again in the distance trying to get a hold of the insurance company. “I think we better get her to the next town before you have a baby on the side of the road. I’ll leave you here, but she needs to go.”

The man and Sam decided to tell my parents who were waiting in the next town to come and get me. The guy waited with Sam until the tow truck got there an hour later. I know that I would not have lasted that other hour without going into full-blown active labor, so luckily my parents had decided not to continue the rest of the journey without us.

When I was finally in their car they cranked up the air conditioning. They drove me to a Subway in Wytheville, VA and I drank several bottles of water. After a little rest and fluid intake the contractions began to slow down.

Not long after my contractions were under control Sam finally met me in the restaurant. We were both safe and it was such a relief. I went on to carry Arianna for another month. She was born a little over a week before her due date in mid-September.

When I look back on this event in my life I see how God was protecting us. Things could have been so much worse, but God provided for a safe return home for all of us. I’m so grateful that my husband did not have to deliver my baby on the side of a mountain on the Virginia Turnpike.