Title: A Madness So Discreet 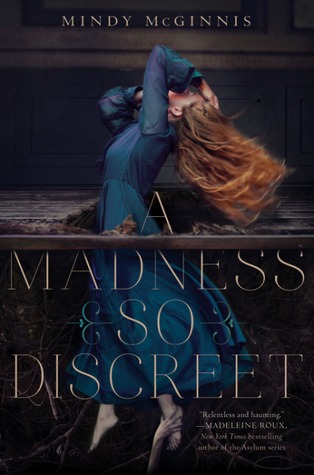 Set in the 1800s in a famous insane asylum in Ohio, this thriller explores insanity and the patients who find themselves exiled to the depths of asylum halls. Grace Mae is the oldest daughter of a senator. When her father’s secrets become a danger to his reputation he sends her away to an asylum in Boston where she is mistreated. During her stay in Boston she meets a young doctor named Thornhollow who specializes in the practice of performing lobotomies to cure the insane.

The doctor sees that Grace is no less sane than himself, but rather she has become the victim of a dark man. He devises a plan to get her out of the Boston asylum and brings her to Ohio with him where she will be cared for and will serve alongside him in the study of criminal minds.

In her new home, Grace hides under the alias of insanity. She trades her voice for a chance to catch criminals like her father and becomes protege to the doctor.

A letter from her younger sister, Alice, changes her focus and forces Grace to take much more drastic action.

A Madness So Discreet was one of my favorite books I’ve read in the past couple of years. It was brilliantly written and had me hooked from page one. The dramatic themes of the book kept me on the edge of my seat as I hoped to find justice for all the wrongs done to Grace by people she should have been able to trust. Her desire to protect her sister from the harm she faced also pulled on heart strings. This book is a cross between historical fiction and criminal investigation with a large dose of family drama.

The author, Mindy McGinnis, is an Ohioan whom I have met on several occasions. Her first book, Not a Drop to Drink, is one that my students read and she came and spoke at my school last spring after we finished reading that book. Also, she spoke to my SCBWI group a few weeks ago about character development. Next month she is releasing a new book, Given to the Sea, that I am excited about. Mindy’s YA books are among my favorites and A Madness So Discreet is my favorite one yet. If you are looking for a book to hook you from the very onset this is a great book for you! 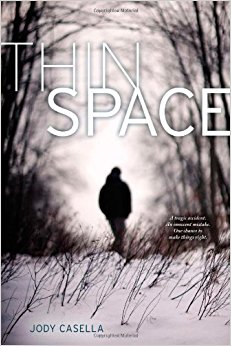 A few months after the car accident that stole away his twin, Marshall is desperate to contact his brother. He remembers the old Celtic legend that his elderly neighbor told him before her passing. A thin space is a place where a soul both entered and left the world. It is believed that these are places where the wall between this life and the after life is thin enough to pass through. At the time his neighbor explained this legend it sounded insane, but now Marshall is so desperate to see his brother and set things right that he’s willing to give it a try.

Before her passing the neighbor left Marshall instructions for locating a thin space. Part of the legend states that one must enter the thin space with bare feet. Marshall goes all over town in the dead of winter without shoes in the off chance that he walks through a thin space.

When Maddie moves into the neighbor’s house, Marshall starts to open up about the accident. At first, it’s the convenience of wanting to search her house for a thin space which sparks their relationship, but soon Marshall learns that they both have something to gain from finding a thin space.

This is a boy’s journey to cope with the loss of a sibling. It shows how we go to great lengths to just have one more conversation with the ones we love who have passed.

I really enjoyed this read. I’ve been reading through YA fiction from Ohio authors this year. I have actually met Jody Casella on several occassions as she is the coordinator for my chapter of the SCBWI (Society of Children’s Book Writers and Illustrators.) If you are looking for a supernatural thriller Thin Space is an exemplary piece.

I belong to an online writing community by the name of Becoming Writer which is sponsored by The Write Practice. Every so often the community is thrown into a writing contest. I enjoy participating in these contests because I tend to get valuable feedback from other writers. The most recent short story contest I participated in was entitled “Spring Contest” and was given the theme of “Rock Bottom.” My story was to be under 1000 words and to incorporate the theme in some way.

I’m currently playing around with a second story idea and I thought I’d give it a shot in the contest. Earlier parts of the story can be seen here. For the contest I chose a scene from the story that goes along with the theme for the contest and I submitted it to the judges. I won’t hear back from the judges for a couple of weeks, but I thought I would let my blog readers have access to the tale and a chance to comment until the contest ends.

So here is my short story:

There was a sound of crashing upstairs above my head. I listened as shards of glass hit the linoleum kitchen floor, and I dropped to the ground. My gun was ready. It had been weeks since I sensed the presence of another. Raccoons had broken in a few times since I bunkered down, but this didn’t sound like the doing of a verment. If indeed it was a person and they thought that they were going to take this house from me they had another thing coming. I trained myself for this moment.

I heard a pair of heavy feet move across the floorboards as I slithered across the cold basement floor to within view of the door. I steadied my breathing to keep from being heard. Light came through the gap between the door and the basement landing. Something from the upstairs impeded the light and I knew that it was no raccoon.

I watched as the knob turned and the door opened slowly. I jumped to my feet and concealed myself behind a bookshelf. I watched from the crack behind the shelf as the person in the doorway lifted their feet to descend the stairwell. I saw my life flash before my eyes.

I saw myself on the airplane to America last month. How naive I was to life outside of my English bubble.

I saw Grandma’s casket at the funeral home; the reason my family had ventured here in the first place.

I saw Mom and Dad and I hiding in Grandma’s house after the news reports about the rebel invasion from the south.

I blinked and I saw myself watching from an air duct as the men wearing the rebel flag around their arms crashed through the front door.

I saw my parents in the back of a humvee tied up and beaten.

I recalled how I had turned the basement into a bunker and survived alone for the past two weeks. I waited for days after the rebels left before moving myself to the basement. I kept hidden in the air duct for fear of being captured as well. After several days I let myself down. I grabbed a television set, a small handgun my grandma had kept, and all of the nonperishable foods from her pantry and created a home in the basement. The electricity and power stopped a few days after they left. The last day the news broadcasts informed me that the rebels broke through forces in Washington and took over the White House. That was rock bottom. Each and every person I cared about ripped out of my grasp by death or rebels. It’s funny how many things flood your mind in a moment when death is knocking.

And then I was pulled back to reality as I realized I was alone in the dark basement as a combat boot struck the top stair. The person had to maneuver around the objects I had piled in front of the door. It was to buy myself time to escape or shoot in case this scenario ever played out.  A line of light protruded from a flashlight in the person’s hand. I sunk back behind a shelf ready to shoot as soon as the light proved the person was near.

The steps stopped just short of my vantage point. With one hand I covered my mouth and nose to keep from being heard. With the other I prepared to shoot. My index finger grabbed at the trigger. My pulse raced. I hadn’t ever killed before, but I was preparing myself to do so in the name of survival. I blinked as the light turned toward me. The weeks in the basement had kept my eyes from direct light. The flashlight temporarily blinded me. Without a clear line of vision I made up my mind to shoot into the light. A shuffle of feet toward me and my sweaty finger began to slowly release the trigger.

“Ainsley!” A familiar voice called out. I aimed my gun immediately out of the light.Then I let it fall to the ground.

The flashlight fell, but I didn’t need light to know that the arms that embraced me belonged to my father. Tears built up in my eyes with the fear of his descent from upstairs and released themselves as I made contact with the first person in two weeks.

“Dad, How did you find me?” I asked through sudden sobs.

“Our camp was freed and we came straight to Grandma’s house. I wasn’t sure that you would still be here. Oh, I’m just so happy that you made it, Ainsley.” I missed his voice.

He hugged me and kissed the top of my dirty hair.

“Lillian, she’s down here.” He called up the stairs. I heard the pitter patter of two delicate feet across the wood floor above as my mother sprinted through the ransacked house.

“Ainsley!” She called out as she ran down the basement stairs and enveloped Dad and I with her arms.

“I made it? Is it over?” I asked Dad. My voice was raspy from lack of use.

“Not quite, but England and France have landed troops in the capital and they have liberated many of the camps on the East Coast.” He squeezed harder as Mom began to sob.

“We will wait it out and then get ourselves on the first flight home.” I could hear the smile in my mother’s tone. I could care less in that moment about my house in London. I had my parents and they were okay. Rock bottom was a thing of the past. That was all the home I ever needed.

It is unlawful to plagiarize any of the original work from The Ameri Brit Mom. No permission is given to reuse this text or ideas without written consent. Always give credit where credit is due.