It’s unreal to me how quickly life can become unbalanced. Over the past couple of weeks I’ve focused more of my time in preparation for the quarter marathon I ran last Saturday. With excessive energy spent on running (which is time consuming) I’ve felt like I’ve allotted less time to writing. All of this has been unintentional of course, but I’m ready to get back into some of my current projects. I’ve even found a contest that I may submit to this week. With the end of the school year in view I’m bound to be busy over the next few weeks, but I’m promising myself to make time for my books and writing.

Today is my eighth week reading from The Irresistible Novel by Jeff Gerke. This has been a great journey which has inspired me to think critically about my own writing. Jeff is helping me find my passions and voice in writing as I read through each chapter. Today the focus is on action and its placement within a story. 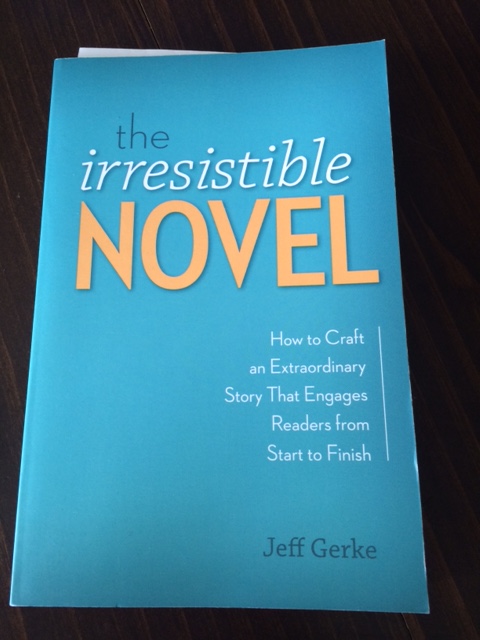 According to Jeff Gerke, “Your novel has about ten seconds to hook [the reader] and maybe two minutes to set the hook. If it doesn’t happen yet you may lose her [the reader.]” (Gerke 62)

In order for a reader to feel engaged enough to buy into your story they must be drawn in from the earliest moments of the book. Not all writers or publishers agree on how this is to be done correctly, but they do agree that your story should begin with action or something interesting. It doesn’t have to be the main action of your book found in the opening paragraphs, but you should consider passing on the information dump at the beginning of the story and instead introduce your character through a series of actions.

Some people who are opposed to mandating action in the beginning of a story root their argument in evidence from best sellers both young and old. If you pull out some of the classics like Moby Dick, Anna Karenina, A Tale of Two Cities, The Adventures of Huckleberry Finn, and Pride and Prejudice you will find that they all share a common opening. All of these famous stories are void of action in the first several pages. They all begin with a unique voice of a protagonist informing the reader of all they need to know before jumping into the action. Those who favor the classics deem this as evidence enough to forget about the requirement of beginning with action.

Others believe that those books are classics and not contemporary for a reason.  Today’s reader differs greatly from the readers of the last century due to all of the media that competes for their attention. If you can’t hook a reader in the first paragraph of your book they are likely to turn their attention elsewhere. Movies, video games, and television have truly changed the writing world whether we like to admit it or not. In order to gain a reader’ investment into our story we have to give them a reason to read from the very beginning by engaging them in action or something intriguing. If they don’t feel engaged in your story they will turn to something else that vies for their attention.

When it comes to how you should write take a moment to consider some of your favorite books. Grab them off your shelf or look them up on Amazon. Read through the first paragraphs and see how many of your favorites begin with immediate action. Based on your results, determine what type of writing you prefer and write that way. It would be useless for you to choose to write in a way that you don’t like. We are the best writers we can be when we write according to our tastes.

If I’m being honest I’ve re-written my first few pages of my novel half a dozen times. My earlier drafts lacked action. At that point I didn’t know my character and so I used those pages to hash out who he was and what he wanted to accomplish. However, now that I’ve finished my story I’ve been able to tweak and change the opening to make it more appealing to the reader. I still have a lot of work to do on my manuscript, but here is a sneak peek into my first book.

He pulled the last of his change from his squalid pocket. Laying the coins on the wood slab in front of him, Kurt leaned over the bar and glanced at the tap offerings. In the mass of change heaped before him he spotted a silver coin larger than the rest. His dirt-lined fingernails picked up the large coin turning it over repeatedly in his hands. The “12 months” engraved on its face had not yet begun to wear. Remembering the newness of his coin and then recognizing his current position caused Kurt to recognize a moment of irony.

“What’ll it be?” The young bartender asked.

“Pint of the cheapest thing you got.” Kurt’s hands pushed the pile of coins toward the man behind the bar. Except for the sobriety coin which he concealed and stuffed back into his pocket.

It was noon on this mid-May day, but the bar was nearly full. Men lined the stools on either side of Kurt as they sipped away at pints of lager. The lights were dim and a flat screen television behind the bar showed coverage from a professional basketball game.  It had been a while since Kurt found himself behind an old wooden bar placing a drink order. Thirteen months to be exact.

In these opening sentences there is action. Not car-chase or explosive action, but it doesn’t open with Kurt spilling his entire life story in the first chapter (which happened in my first draft! What was I thinking?) To me, beginning with action doesn’t mean that you always have to start with the major plot line, although in my story Kurt’s sobriety is a huge factor into the plot. When I think of beginning with action I tend to favor seeing a character doing something out of the ordinary for themselves which will eventually become a larger part of the story down the road.

Just curious, how many of you would keep reading my story if I did indeed choose to begin it as it appears above? Any suggestions?

3 thoughts on “Begin With Action: The Irresistible Novel”