I’m one of the lucky residents of the Mid-West that still has electricity during this Icepocalypse. We are trapped indoors on this Friday morning, but the ice and snow outside are wrapping us in a tranquil blanket. Below, I am joining all of my fellow writers from Five Minute Friday to discuss this week’s prompt: Achieve.

On January 1st, I launched a new brand and business. I’ve been blogging since 2015 and after wrapping up my studies to earn a Master’s degree in English, I decided to follow my dream of offering writing and editing services to the public. My goal is to help others become more confident writers at an affordable price.

At the turn of the new year my blog became a brand and I began offering services for clients. Since January 1st I have edited two personal essays, a picture book, and a full manuscript for clients. I began building a stronger social media presence and added to my list of subscribers by 300%. This process has been inspired by courses, discussions with authors, and my own research. Things are still in the beginning stages, but I am so proud of what The Ameri Brit Mom was able to achieve in January 2022.

If you would like to know more you can join my FREE subscription. With this subscription, you will receive one monthly newsletter with updates, deals, and ideas.

Check out my Services page if you are interested in using The Ameri Brit Mom for projects. I can work with you on anything from a one-page letter to a full manuscript/book.

Also, I am so proud of the work I have done with clients this month. I wanted to share some of their own words about their experience working with The Ameri Brit Mom:

If you want to support the launch of this business you can also join my Patreon. For $5, $10, or $20 a month you can receive exclusive content and free critiques/edits. I am still working on building a solid client list and would love to work with you on projects in whatever stage of development.

In Ohio, I spent my Friday preparing for the imminent arrival of this weekend’s snowpocalypse. After school yesterday I joined the rest of the state at the grocery store stocking up on necessities. If you want to join in on the weekly fun over at Five Minute Friday or check out others’ posts be sure to click on the link. Here is my five minute uninterrupted response to the prompt: Better.

Sure, there is a mound of laundry beckoning me to wash and a room full of toys that need to be boxed up, but today I chose to hibernate. The steady rhythm of the snow outside is the perfect backdrop to my reading adventure. The laughter of the children forming snow men and throwing snowballs can not be outweighed.

I was scheduled to attend a writing conference today, but the weather forced me inside. I was excited to focus on my writing today (I haven’t done anything like that since I had the baby last year.) But if I’m honest having this perfect day at home turned out better.

There will be other conferences.

Today I am choosing to embrace the tundra and enjoy the benefits of this house arrest. I’m taking time to read, write, and make memories with my family. 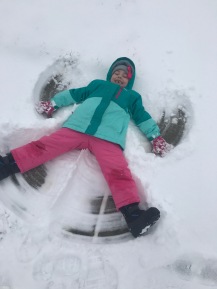 If you were snowed in how would you spend your day?

Today marks my third consecutive day out of school. My district is buried in nearly a foot of snow with icy conditions due to the subzero windchill factors. I’m not lying when I talk about the unpredictable Ohio weather. Last week I was shopping for rain gear and wearing short sleeves. This week I’ve been locked indoors and kept my slippers and robe on most of the day.

As much fun as a snow day can be I’ve learned that when one is confined to their home for days on end that they better be prepared with activities for a toddler. My daughter is an active one. She constantly needs to be doing something or else she finds ways to get herself in trouble. So here is a look into what we’ve been doing to try to keep our sanity as a whole family during these days of being snowed-in.

1.Lots of Art Projects– From Play Dough sessions to painting and coloring on her easel, we’ve kept our artistic girl busy with project after project. Arts and crafts are one sure way to keep her occupied and away from electronics (which is a big struggle these days!) Also, we’ve been working on homemade Valentine’s cards as well since that is coming up.

3. Reading– I’ve been enthralled by City of Bones by Cassandra Clare. Whenever Arianna is resting or taking time to play in her room I’ve grabbed a cup of coffee, a warm blanket, and my books and curled up for some reading. This is a fantastic book. I’m getting so caught up in the world described in this book and it’s a real struggle to put the book down. 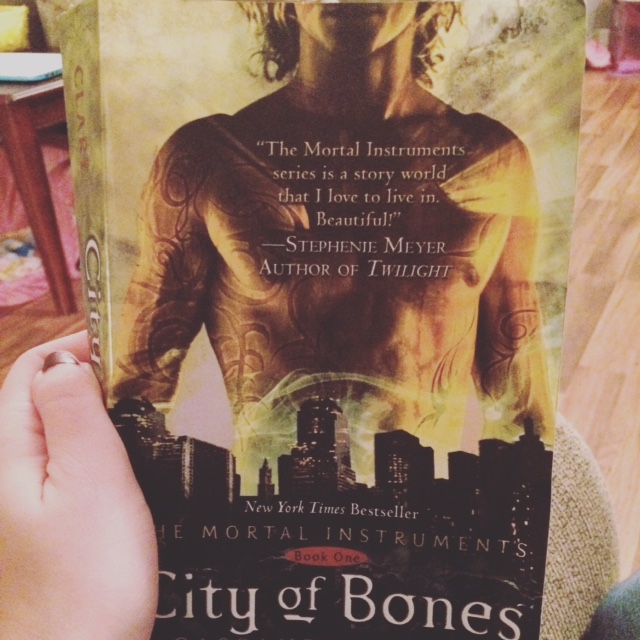 4.Binge Watching Netflix-Okay, so this may be a big activity fail, but snow days wouldn’t be snow days without at least a little bit of Netflix, right? Currently we have exhausted all of our favorite shows so we go back and forth watching newer episodes of shows we’ve watched in the past. Don’t judge me that I’m just now figuring out who A is on Pretty Little Liars. I’m a bit late to the party.

5. In-Home Workouts– When all is said and done, I’ve basically burned 0 calories at the beginning of this week. On Tuesday night I checked my Fitbit which confirmed my suspicion that I had barely even moved all day. (I did a lot of reading and TV watching.) So without the option of venturing outdoors I decided to get creative with my workout regimens. Since Tuesday I’ve completed an elliptical workout, a core workout (using a Pinterest plan), and done a few laps up and down my steep staircase.

What type of snow day activites does your family enjoy!?!

I’m sorry for falling behind in my posts over the past several days. The PARCC tests have taken over my life. My students have been taking the PARCC over the past week and it has been a scheduling nightmare. I’ve spent most of the school day in the computer lab proctoring tests and missing out on the classroom experience. I am so far behind in curriculum due to testing (and the 13 snow days my school has taken on). At some point winter will cease and the testing will be finished, but right now it seems never-ending. I’m trying not to complain and take everything is stride, but as a teacher I am longing for a semblance of routine back in my life. I long to see and TEACH my students again. I long to feel productive and like I’m making a difference. All of these calamity days and testing sessions are causing me to involuntarily lose my motivation. Come on, March…let’s get warmer, sunnier, and calmer.

As a lifetime resident of central Ohio I have grown up accustomed to the delightful gift of SNOW DAYS that occur a few times every winter. You will never hear this teacher complain about an un-scheduled day at home. However, one thing I have not come to expect due to my experience is the SNOW WEEK. Never in my recollection have I missed a total of five consecutive days of school due to weather. Tomorrow may be a first in the records for many central Ohio residents. And like I said…you won’t hear me complaining.

Monday was technically President’s Day and school was not scheduled, but by mid-morning on Monday the fluffy flakes began to fall on our small town and I was trapped indoors all day. The snow did not let up on Tuesday or Wednesday landing nearly a foot of snow in total over those three days. Today the extremely low temperatures and wind chill landed nearly all of central/south central Ohio on a school cancellation. And the future looks bleak, my friends. According to some forecasts tomorrow looks to be just as bad as today if not worse. This really may be a 0 day work week.

On the bright side I have had an extremely productive week on the home front. I conquered several tasks on my to-do list and cooked healthy homemade meals every night all while tending to my precious two year-old flu victim.

As my sick toddler sleeps away her bug I can’t help reflecting on the positivity that this week has brought me. Before she was infected with the flu I made many fun memories with my Princess that may not have happened had I been working this week. She has a knack for cooking and art so we spent many of our house-ridden days baking cupcakes (in our “bakery” as she calls the kitchen). One afternoon as I sat grading some projects she sat beside me insisting that she do her “school work” which was her drawing shapes and letters in her own notebook. After bath time when she was beginning to show signs of illness we set her bedroom up like a store and she “bought” the outfit she wanted to wear using some play money and placed them in a shopping cart before putting them on. It’s times like these where I can’t help, but stop whatever I am doing and soak up as much as I can from those adorable moments.

This week has truly been about spending time with my favorite little person. In my first post I mentioned that I learn more from my daughter than I could hope to teach her and that is exactly true. She has taught me to prioritize and love in a totally new way that is unlike marriage love. Life’s little lessons have been sent through such a smart and angelic child and I feel completely blessed to be her mother.

All of these good moments and fun times have culminated today. I’ve done all I can to help her feel comfortable and better as she battles a fight with the flu. From rubbing her back as she vomits to letting her lay on me for hours on end I have done my best to help her get over this nasty sickness. As much as I hate watching her feel so miserable I’ve truly loved the snuggle time I have gotten with my baby today. She is usually a very active girl, but it is nice to have a day to slow down and cuddle. (And maybe not leave the living room couch) 🙂

As the fever is coming down and the energy is re-entering her small body I am so grateful for so many things. I am thankful for her health, her BIG heart, and life’s little lessons. It’s so easy to get caught up in my own life and all of the many things I do, but I’m learning to stop…slow down…and make more MEMORIES.